St. Panteleimon lived around 301 AD in the town of Nicomedia in Asia Minor during the reign of King Maximianos. He learned the Greek language and studied medicine.

His father Efstorgios was a pagan and his mother, Efvouli was a devout Christian. Pantoleontas, as he was then called, was baptised by St. Ermolaos, a Christian priest at Nikomedia who later was sentenced to death for his Christian beliefs, after a period of being taught about Christianity, Jesus and the Bible. One day Pantoleontas saw in the street a child lying dead after being bitten by a poisonous snake. He immediately recalled the Christian teachings of St. Ermolaos and thought to himself: “If Jesus Christ fulfils my request for the child to rise and the snake to die I will not want any further proof of what St. Ermolaos is teaching me and I will become Christian.” He then prayed for the child to rise and his prayers were answered. The child awakened and the snake was cut into pieces and vanished. 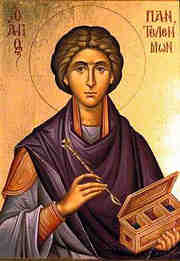 After he was baptised he went on to heal and cure illnesses both curable and incurable, receiving no money for his services and sometimes sharing any money he had with the poor. This brought hatred by the more senior doctors against him and led to his arrest by the Kings’ soldiers.

The King at first tried to convert him with many promises but Pantoleontas remained firm to his Christian beliefs. This upset and angered the King who ordered his torture and eventual but painful death. Pantoleontas was ripped with iron nails, burned with candles, dipped into molten lead, thrown into the sea with a rock tied to his neck, put to the wildest of animals, tied around a heavy rolling wheel and had miraculously survived all these tortures with the help and faith in Jesus Christ. He was then tied up on an olive tree for the ordered execution but when the sword was raised it melted like butter in a hot oven. The soldiers were frightened. Pantoleontas prayed for their forgiveness. A voice was then heard saying from above: “From now on you will be named Panteleimon, because you forgave everyone including your enemies. Those who call on your name shall receive mercy and help.” Saint Panteleimon then insisted that the executioner proceeds with his orders to execute him.

Thus Saint Panteleimon was beheaded on the 27th July. This day has been dedicated to his memory since.